Still reassuring yourself by saying “the Big House” as the biggest stadium in the Western Hemisphere after the recent fiasco against Spartans? What I am going to talk about might disappointing you because “the Big House” is nothing compared to the largest speedway in the world. As a matter of fact, the majority of NASCAR tracks in the US are larger than “the Big House”, and the largest one among them, the grandiose Indianapolis Motor Speedway, once attracted roughly 400,000 spectators, is practically four times bigger than the highest capacity of “the Big House”.

Apparently, from those comparisons and stats, you have already successfully conjectured: the protagonist here is NASCAR. In fact, apart from introducing the history and development of NASCAR, what I am going to argue in this blog post is that: NASCAR (forget about football and baseball) is the actual and genuine “Ultimate Representation” of  an American Dream

END_OF_DOCUMENT_TOKEN_TO_BE_REPLACED

Is it mine or yours? Given what you put into the game yourself, I should be able to make of it what I want, right? Why do I complain about your decisions ad nauseam when I’m playing yet outside of that I’m eager to recommend it to friends? These are a few of the questions I have found myself asking following the release of the newest addition to Bungie’s list of games. For those that aren’t following, Bungie, Inc. is an American video game developer group widely known and celebrated as the creator of the Halo series, one of the most successful gaming franchises to exist and something even non-gamers can recognize. The Halo series, being an Xbox exclusive title, was at the time of Bungie’s acquisition and still is Microsoft’s flagship series, earning them billions of dollars in revenue. No longer wanting to be a part of this larger company, Bungie moved for independence and in 2007 came to an agreement with Microsoft that included moving the Halo universe from Bungie over to a new studio owned by Microsoft known as 343 Industries. Out on its own, completely independent and without the series that made them famous, Bungie began development for a game that had been, ever since they began teasing its release, the cause for great excitement. For seven years “Destiny” was planned by what could be considered one of the greatest developing groups of all time yet surprisingly since its release on September 9th of this year, there has been an uncanny amount of complaints, one of which I’d like to discuss here.

END_OF_DOCUMENT_TOKEN_TO_BE_REPLACED

The integration of sports is a messy business. While there are indisputably supporters of allowing sports to have heterogeneous competitors, varying in age, gender, and physical ability, there are also those who feel the need to rationalize the concept. As we learned from rock climbers, rules can in fact change, however, it is quite difficult to get everyone on board with the same idea that leagues can allow for teams that feature different genders, and it turns into a very heated topic of debate. As we learned in the article about Caster Semenya, people reacted aggressively when rumors surfaced regarding her gender. Semenya’s case is one situation where people were unaccepting about the concept of heterogeneous competition; however, there have been successful gender integration in sports before, such as in the case of Ila Borders.

Although Ila’s sports career may not be the most memorable in terms of her statistical achievement in sports, Ila is far more memorable for her contribution to the world of professional sports as a whole. Ila Borders was the first female professional pitcher in a men’s professional baseball league, and boy oh boy did she have a hard time getting there. She started a young age, and from the beginning she suffered through discrimination as a female baseball player. However she eventually rose past the initial discrimination, some of which came from her very own teammates, and had a decent career as a lefty pitcher on the Duluth-Superior Dukes. While it may not have been the MLB, Borders was able to contribute greatly to the success of the team for her duration of her time there, before transferring teams. The inspiring thing, however, is that she was able to grab the support of the Dukes’ fans as well. She was not just a pitcher, she was a pitcher that people liked, one that people wanted to cheer on, one that was at the same level of other men.

However, Ila Borders is a rare case of integration in sports, and not one that is memorable enough to inspire a revolution that would eliminate gender borders. Such as we have learned in the case of Caster Semenya, gender and sports are things that require polarization. Having integrated sports teams would be a wonderful thing that I truly hope to see one day, but it is unlikely that America will see a bunch of Ila Borders that will collectively break down the homogeneous male representation in modern sports.

While reading the Dynamics of Modern Sport by Eric Dunning, I came upon an important quote that plays into my life specifically today. He said “trend towards growing seriousness and competitiveness or, alternatively, towards the ‘deamateurization’ of sport, is a compelling social process” pretty much Dunning is trying to explain how modern sports today rely on revenue from match attendance and commercial sponsorships. This plays into my life because, now being on the Michigan soccer team and after reading this I really have started to realize how much our team and teams in general, depend on the attendance we get to help the program grow as a whole. The soccer program stresses the advertisement of the team, for example at the beginning of the season us freshman are given the job to post our team poster with our schedule everywhere around campus. We are to do this because it helps raise awareness for our team and helps bring more people to our games. END_OF_DOCUMENT_TOKEN_TO_BE_REPLACED

What makes things fair? I guess it depends on how fair is defined, but if I were to look at a dictionary it would tell me that fair means legitimate, in accordance with the rules and standards, and most importantly in an adverbial sense, without cheating or trying to achieve unjust advantage. But is there truly a way to remove that advantage, particularly among athletes and non-athletes at an athletically dominated university? END_OF_DOCUMENT_TOKEN_TO_BE_REPLACED 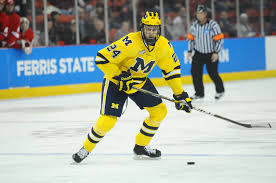 “Ahh!” screamed the player as he fell to the ice in pain.  I gritted my teeth and watched in morbid curiosity, a player for the opposing team had just been hit in the neck by a slap shot. I sat in the spectator section at the Michigan versus Wilfred Laurie hockey game and to my astonishment the player quickly recovered and continued to play. Only a moment before he laid on the ice gripping his neck.  The student section continued to scream and cheer on as if nothing had happened.  I was also surprised at the chants I was hearing, most were fun, some were a little strange and then a couple were quite vulgar. Never had I seen a group of people yelling and screaming in such a manner, football is one thing but hockey was on a different level.

I had a similar feeling while I was at the Michigan versus Maryland girls’ field hockey game.  I was surrounded by parents of opposing players and they too were getting very into the game.  They were screaming at the ref and players as loud as they could.  At times I almost felt embarrassed for these parents.  But I realized that this is exactly what A Bartlett Giamatti was writing about in his book Take Time for Paradise.  These parents and students were living through these players. The students at the hockey game and the parents in the stands cannot compete on the level of those in the game so they instead chose to play through the players.  And to them that’s what they were watching- play.  But it was most certainly not play for those in the game, they were competing not playing.  By Huizinga’s definition play is contained, it does not spill over into the real world and does not have any consequences. For those competing this is most certainly not the case.  If that hockey player doesn’t get up after getting hit in the neck and is then unable to play, he is cut from the team and he loses his scholarship and can no longer afford an education. If those on the ice or field do not play well or make too many mistakes then they are benched, they can be cut by the team and they too may lose their ability to afford an education.  There is no situation in which something as serious as what I have just mentioned can occur.

In my political science 101 class we talked about things that we consider play that do not fit into Huizinga’s definition.  One student came up with the games that the Ancient Aztecs played in which the losing side would be sacrificed to the gods.  Similar to the ice and field hockey game, the presence of such a consequence transforms what was once play into competition.

These players have extra stress put on them to play well.  The fans do not have such stress so, as Giamatti writes, these people are living in utopia. They don’t have to worry about their scholarship or the physical labor of playing the sport and can thus become completely enthralled with the play aspect of the competition. So when that puck hit the player’s neck, there were an infinite amount of terrible things that could have resulted from it, but we fans just kept on cheering.