While the actual games and wins-loss records of teams are the actual determinant of how the teams do, usually just having standings are not enough for people. It can be seen quite obviously in the way that college sports release polls of the top 25 teams as decided upon by a committee of higher ups or a collection of coaches. Rankings can even be seen in professional sports from reporters’ power rankings, such as the one Peter King writes in his weekly Monday Morning Quarterback column, or even in daily debates of which team would win a hypothetical game by word of mouth. The way that people obsess with rankings relates to how in Homer’s Iliad contestants in the funeral games take great measures to assure their rightful rank at the end of the competition. Also in relation is how Tejada-Flores ranks the difficulties of separate climbing events in his piece “Games Climbers Play.”

END_OF_DOCUMENT_TOKEN_TO_BE_REPLACED

In an intensely scrutinized decision as the state of Michigan approaches election day, Governor Rick Snyder signed a bill that is quite controversial to some citizens. Snyder signed into law House Bill 5606, which prohibits Tesla Motors from selling their cars

in Michigan directly to buyers but rather through a network of dealers. Ultimately, Tesla can still sell their vehicles in the state of Michigan but they must do it through a third-party which makes things much more difficult. In a state known for our automotive industry– namely companies with the name General Motors and not Tesla– Snyder is being criticized by many people for signing this bill so close to election day. From the lecture of Weber on Politics as a Vocation, how would Snyder stack up as a politician in Weber’s eyes when it comes to his decision on this bill?

In a state with such a large automotive presence it is no secret that the companies in that industry have a large lobbying presence particularly within the state. Many people speculate that a large part of the motivation for Snyder and other legislators to sign this bill was to avoid negative advertisements from Michigan automakers and dealerships prior to the coming election. Others were not pleased with how the legislation regarding Tesla was put into the bill and also the addition coming so late. Even U of M law professor Daniel Crane weighed in on this issue, stating “This is an embarrassment for the State of Michigan and democracy… When nobody was watching the dealers slipped this language into the bill, and told Snyder to pass it so they would have an advantage over Tesla in the future.”

In the eyes of Weber, a good politician is someone who acts with ethics of responsibility– keeps a clear head while making decisions, makes future-oriented decisions, and makes these decisions for the good of the people. While I don’t necessarily agree with what Snyder did in this instance, by these definitions Snyder is not entirely in the wrong. According to Weber, one of the key qualities of a good politician is being able to make decisions for the good of their people. While automakers not named Tesla operate in the state of Michigan, this bill could be seen as something that protects jobs for people in the state. If it is much tougher for people to buy a Tesla, consumers in Michigan are much more likely to buy a car made by an automaker that operates in-state. If more people are buying cars from companies in-state, that would most likely protect jobs of the people Snyder makes decisions for. By Weber’s definition, Snyder could definitely be considered a good politician in some ways.

On the other hand, Weber defines a bad politician as someone who acts with ethics of conviction– being absolute in their decisions, and being act-oriented opposed to future-oriented when making decisions. I believe that this decision by Snyder would classify him as a bad politician in the eyes of Weber. While there are some things that are rational about this bill, I agree with what Crane said regarding the issue. Because of the timing and circumstances of how the bill was changed, it seems that Snyder was making an act-oriented decision that would help him and his party in the upcoming election. Ultimately, the bill doesn’t do enough for the people in our state to be considered future-oriented and for the good of the people. 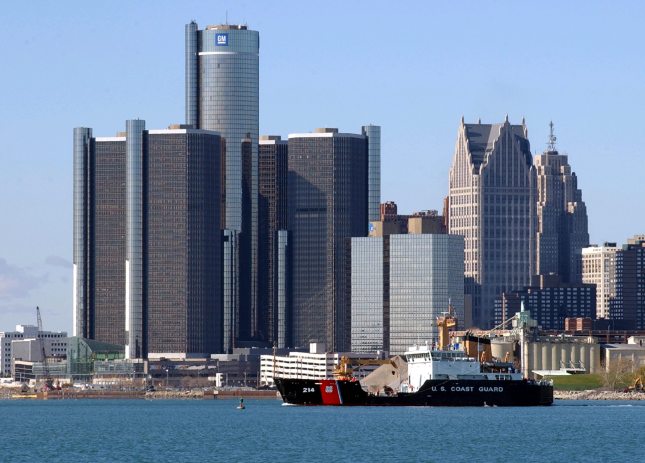 A photograph taken from the edge of the Detroit River.

As many Americans know, the city of Detroit has had its fair share of struggles. One of the most recent issues plaguing the city of Detroit has to do with water. A recent increase in water shutoffs by the city has sparked controversy amongst many Detroiters. On June 26, 2014 protesters circled in front of the Detroit Water Board building, declaring that the city had violated their human rights by shutting off their access to water.

Deputy Director for Detroit’s Water and Sewage, Darryl Latimer explained that those who are considered “delinquent customers” are getting their water shut off because the city can no longer afford to offer free water to customers who are not paying their bills. Those customers that fall under a delinquent status means that their bill is at least sixty days past due and they owe over $150. Furthermore, Latimer explained that a visit to the Detroit Water Board office could help customers who are having difficulty paying their bills. He says that the city is willing to work with customers who are facing issues of affordability. A week before the June protest, the Detroit City Council voted and approved an 8.7% rate increase on water because of their accumulating debt.

With help from protesters and the media, the issue of water shutoffs in Detroit has become bigger than life, receiving way more attention than it should have. Yes, I believe that water is a necessity, considering we as humans need it to live. However, water is most certainly not a human right. Like Detroit, towns and cities across the country participate in a similar process when it comes to collecting, purifying and delivering water to millions of homes and businesses daily. This process is called a service. A service is not a right and therefore this process that is completed for us, must be paid for. Why should Detroiters receive free water while millions of other Americans continue to pay their bills? END_OF_DOCUMENT_TOKEN_TO_BE_REPLACED