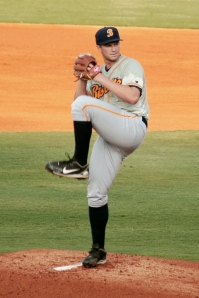 Pitches in the MLB are sometimes separated by minutes, taking away from the action (from wikimedia.org).

Everyone has routines, or practices which they perform everyday. The same can be said for athletes in sports, such as in baseball. Baseball is, at least in my opinion, a game known for its history. Changing the game itself changes that history into something new and not necessarily better. I remember loving baseball as a game and something which always brought me job. I absolutely loved going up to the batter’s box and being able to use what I have learned and practiced in my years, only to be obnoxiously stalled by a pitcher taking too long to throw or be walked. In case you are not familiar, walking is intentionally throwing four “balls” or unhittable pitches to allow the batter to go to first base and stalling is self-explanatory. The process of these delays took away from the game and made it seem much slower. These were unnecessary parts of the game and thankfully Major League Baseball (MLB) has proposed limiting the time these practices consume and other changes to make the pace of the game faster. These rule changes are welcome to me, unlike the National Football League rule changes commented on by Marc Tracy in his article “NFL Rules Changes: When Is Football No Longer Football?“. END_OF_DOCUMENT_TOKEN_TO_BE_REPLACED 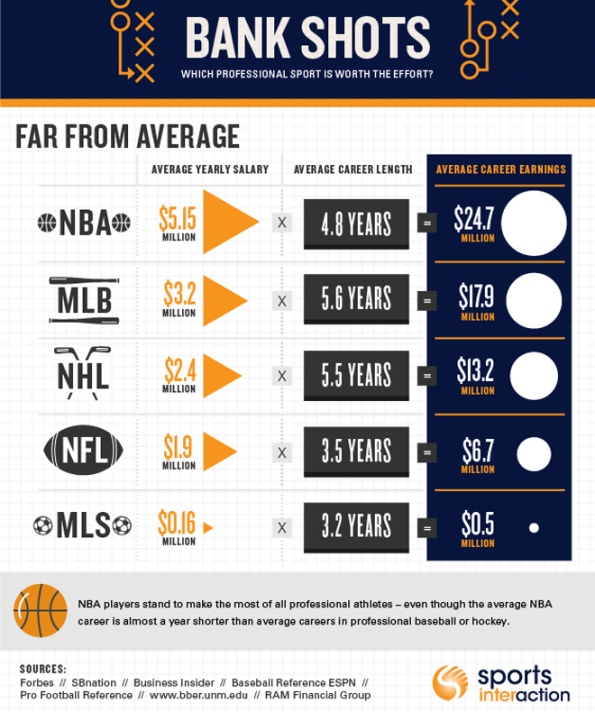 I’ve read many blogs from my peers about the NFL and guaranteed contracts, safety, the risks but I want to compare the sport. Why is it that on average football players get paid less than baseball and basketball players. The average salary for the MLB in 2012 was 3.2 Million , NBA 5.15 Million and even the NHL coming in at an average of 2.4 Milllion. The NFL comes in 4th place at only 1.9 Million. I know many people would wonder why I say “only” but this is because compared to the average of the other sports players in NFL are at a serious disadvantage. Not only is Football a sport with higher risk and lower pay but it is one of the most popular, most loved sport in America. So, why is it that they are paid less and their money isn’t guaranteed like those in the NBA and MLB. My colleague gives great insight on NFL contracts and certain terms in. Instead of just assuming things about this topic I referenced some of the articles I’ve read in class. In Dunnings Dynamics of Modern Sports he talks about the relation of spectators and players so I thought. Do NFL players not have as many spectators is that why they don’t get paid as much, do people give more support to those who play different sports.

Green Bay fans showing their love for a player.
http://bleacherreport.com/articles/1230923-top-10-fan-bases-in-american-sports/page/11

That couldn’t be the reason because out of the top 10 largest fan bases in professional sports majority were football with the number one fan base being the fans and spectators of the Green Bay Packers a team in the NFL. NFL Contracts are not only on average less than other professional sports but they are not guaranteed.

I would say that this isn’t fair but others may feel that this is a form of social contract. Although many kids don’t know that football is a sport that they may lack financial in relation to other professional sports they still agree to play this sport as opposed to baseball or basketball. In Social Contracts Hobbes speaks on the power of individuals and their decisions saying “ an implied agreement. Hobbes asserted that the people agreed among themselves to “lay down” their natural rights of equality and freedom and give absolute power to a sovereign. The sovereign, created by the people, might be a person or a group. The sovereign would make and enforce the laws to secure a peaceful society, making life, liberty, and property possible. Hobbes called this agreement the “social contract.” So are football players agreeing to be paid less than the other popular sports in the countries when they decide to play or is this not fair. People don’t determine what they are born with, these players couldn’t pick between basketball and football talent, they can just simply improve the natural skills they were born with. These players risk extreme physical trauma a lot more extreme than those who play baseball or football. Shouldn’t they get payed close to the amount. Basketball players get an annual salary that is on average more than twice as much as football players and they don’t risk nearly as much. I guess one could say that life isn’t “fair” that all these athletes get paid a lot more than a lot of people but when do hard work and risk begin to add up with pay across all boards. There is no social contract that can say that these athletes are agreeing to unfair treatment. The Liberty Bell – A symbol of freedom [1] (Wikimedia)

What does it mean to be free? Is it the ability to live the life that you want or is it to live the life that society says you can have? The society we live in today places has many restrictions and judgments on what we can and cannot do. I disagree with these rules; if I want to jump from a mountain, I should be allowed that right. (As a previous blog post mentioned, if I want to use marijuana and cause harm to myself, I should have that right to legally do so) In fact, I believe that I should be able to do anything I want without facing any consequences as long as I do not harm others. Our society today does not support this idea and instead pushes for restrictions and conformity.

END_OF_DOCUMENT_TOKEN_TO_BE_REPLACED

If you were given tickets to attend a men’s college basketball game or a women’s college basketball game, where would you go? Before you choose, think about what type of sporting event you would be attending. If you go to the men’s game you would most likely see a fast paced, sporadic style of basketball. There would be a lot of isolated one-on-one basketball between opponents trying to out do their teammate or the man guarding them that night. There may be few offensive sets that involve each member on the floor touching the ball before someone shoots the ball and fundamentals may not be a major emphases but you’re almost guaranteed to see a couple dunks and nice ball handling  throughout the game. The game will be played at a very fast, athletic and skillful level. If the teams are good the atmosphere will be wonderful with a sold out arena and loud crazy cheering fans with a packed a energetic student section. Now, If you attend the women’s game there may be a few differences from the men’s game. The game will be very fundamental with a lot of passing and team play. The game tempo will be slowed down, not being nearly as fast as the men’s game and the athletic and skill showcase may not be as high. You’re almost guaranteed to not see any dunks unless Brittney Griner goes back to college and just so happens to be playing that night. The atmosphere may not be as loud and electric as the boys game and sad to say a student section may be non existent. The arena may not even be half full, depending on how good the teams are that are playing. Now that you have a good idea of what both games typically consist of because there are occasions where the two game conditions will be completely different but if we’re talking about a stereotypical game, which game would you attend? 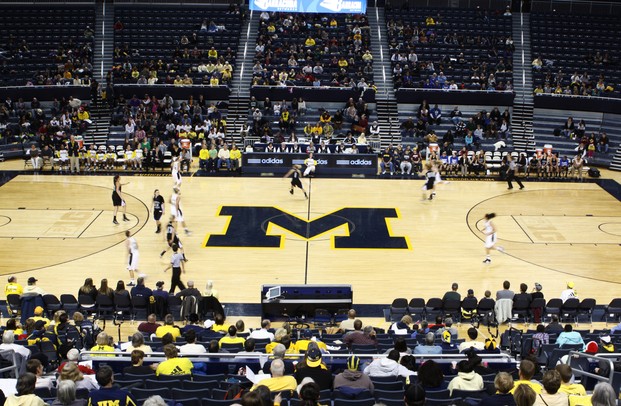 A half full Arena at a Michigan Women’s basketball game

Women gained the right to participate in sports when Title IX (Title 9) was passed. Title IX was included in the Education Amendments of 1972 that required schools that receive federal funds to provide girls and women with equal opportunity to compete in sports. Although women gained the right to compete, the sad truth about women’s athletics is that they have always been looked down upon when compared to men’s athletics. Genetically, men and women are created differently. From an athletic standpoint, there are many advantages and disadvantages that men and women have over each other. But, I don’t think it’s fair to automatically and consistently  dismiss and look down on women’s athletics. Regardless of gender, I think that all athletes are gifted in their specific sport and put in a lot of work to be a good player. The amount of support and respect that athletes and their respective sports receive should be based on success and not gender preferences.

In Professor Manty’s “The Playing Fields of Eton” he says that, equality requires eliminating the “arbitrary” effects of agent-independent factors for how a person’s life turns out, but it doesn’t require compensation for the opportunities she herself has squandered. After reading that excerpt I was able to apply that to women and athletics. Just as men athletes, women have to work just as hard if not harder for the opportunities and successes in her life. Women just like anyone in the world, has the ability to do and achieve whatever goals they set for themselves. Women athletes should receive more recognition, support, and credit for their sports.