President Obama Announcing His Executive Order To The Nation

As many of you probably heard by now, President Obama just signed Executive Order 13682 which will move forward immigration reform after nearly six years of debate. In my last blog post, I talked about how the huge divide between the Democrats and Republicans has resulted in more then six years of constant gridlock in the lawmaking process and immigration reform is not excluded. President Obama has been threatening Congress for quite some time now to work out an immigration bill or he will be forced to use an executive order. In my Political Science class we talked about Niccolo Machiavelli, Edmund Burke, and John Stuart Mill and it is interesting to see how certain values of these philosophers show up in the immigration debate and why it has led to immigration being such a controversial issue.

END_OF_DOCUMENT_TOKEN_TO_BE_REPLACED

Two weeks ago I attended the Detroit Lions football game against the Miami Dolphins in downtown Detroit. As I sat down behind the end zone and dug into my bag of peanuts, I heard the announcer over the speakers reading some messages. These messages were really nothing out of the ordinary; go to gate 24 for this, gate 30 for that, drink responsibly, our sponsors are blah, blah, blah. It wasn’t until he said something along the lines of “we ask that you please watch your language” when I began to question the amount of authority the owners of that particular stadium had over me and how that affected my individual rights. Ok, no I didn’t, but I am now – and it’s brought me to an interesting connection to a reading we’ve very recently done.

END_OF_DOCUMENT_TOKEN_TO_BE_REPLACED 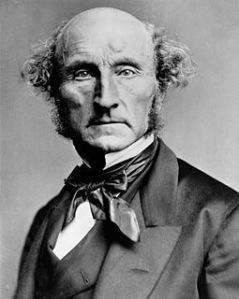 In my Communication Studies 101 class we were discussing how society pretty much decides what you can and cannot do. Well if you let it. We touched on the different ways advertising makes you believe that you are being different and you are being an individual, but in reality you aren’t. We discussed how this idea of being an individual is really a way of trying to get you to conform to a general target audience to get you to start buying their product and other products like it. While going through my notes from this lecture, I automatically thought of John Stuart Mill’s On Liberty chapter 3.

I think his idea of what being an individual is really hit home with me because so many people in our society think they know what being an individual is and what it entails, but I honestly don’t think they do. In this chapter he really highlights on the fact that we have the right to do what we please and not have to answer to a group of people for permission, that human improvement requires “freedom and variety of situations”. I feel like if people understood that and excepted that, then our mass media world would be a lot different. I think a lot of the categories and groups that society tries to box us in would be less detrimental to us and less harmful to people if they followed this way of thinking. I know it probably won’t happen, but it’s just something I thought about when I was reading the information in the text.

I think society spends so much time on placing us into categories. I don’t think it spends enough time celebrating our differences and our individuality because when people think of differences they think of weird or outcast. I think that’s ridiculous, we should be able to celebrate ourselves and individuality without feeling like we won’t be socially excepted.

When do words possess authoritative quality? At what point can we differentiate a simple promise from a formal contract? These are just some of the questions that arose when I thought about the “social contracts” that Thomas Hobbes mentioned in his book, the Leviathan. The portion of the Leviathan that I will be referring to is titled “Of the Causes, Generation, and Definition of a Commonwealth” (Chapter 17). The arguments and philosophies presented in this chapter were intended by Hobbes to describe the necessity of sovereign institutions for peace and security. Hobbes insisted that a visible power(s) needed to be exist in order for humans within their regions to be free from the condition of war. The condition of war is a term coined to describe the natural state of humans to preserve their own lives against his/her enemies; in this state, all other beings are considered enemies. A consequence of this state would be that no person would have security no matter how adept they were. Original copy of the Leviathan. Credits to Wikimedia Commons.

END_OF_DOCUMENT_TOKEN_TO_BE_REPLACED

Shaun White competing in the Men’s Snowboard SuperPipe at the X Games.

Those of us who have seen Shaun White do a Double McTwist 1260, his signature snowboarding tick, have thought to ourselves, “This guy is crazy!” Ironically, the next thought that comes to mind is “I want to do that!” However, because of the danger associated with the Snowboard SuperPipe at the X Games, many people wisely decide it’s much safer to stand on the sidelines and watch in awe as White, nicknamed The Flying Tomato, attempts a series of flips and turns that can possibly result in serious injury. This danger isn’t exclusive to just snowboarding; it is central to any sport in the X Games, which is likely the reason why it is has become so popular. With other sports like skateboarding, surfing, skiing, BMX, motocross, and snowmobiling, the X Games are enough to please any adrenaline junkie. END_OF_DOCUMENT_TOKEN_TO_BE_REPLACED

In today’s society it seems as if what is ethical is up for debate. The line between right or wrong in some’s eyes is becoming thinner and thinner.  However, looking through the eyes and ideology of John Stuart Mill , the line is drawn pretty clear in which there is no gray area. In Chapter 4 of John Stuart Mill’s “On Liberty”, Mill introduces ‘The Harm Principle’ in which an individual may act as they please, as long as it doesn’t harm others. Mill goes on to talk about certain acts such as self-
regarding and other regarding. Mill believes other-regarding acts that are bad are punishable while self-regarding bad

acts are disapproval legitimate. Mill also believe that although one may acts as they please, they must take care of their distinct and assignments to others. Failure to do so will result in punishment.

Earlier this year in March, a woman from the state of Arizona, Shanesha Taylor was arrested for leaving her two children in a hot car she went for a job interview. It was reported that Taylor left her children in the car for over an hour. She was later charged with felony abuse and would potentially face imprisonment. After her arrest, Taylor’s teary-eyed mugshot went viral, sparking huge conversation on her case as well as supporters from all over the country. Many petitioned for all charges to be dropped and an estimate of $114,000 has been raised on the single mother’s behalf. Homeless and living off of welfare, Taylor was in search for a better life for both her children and herself. Although she left her children unattended in a hot car, many people believe that Taylor’s acts should not be punished, because it seemed her overall goal was not to harm her children but rather care for them.