Marc Tracy wrote the article, “NFL Rules Changes: When Is Football No Longer Football?” on August 2, 2013 for the New Republic. Tracy focused on the new rules adopted by the Competition Committee of the NFL in 2013. In order for football to be safer for players, the committee discontinued kick-offs at the Pro-Bowl, the tuck rule, and players lowering their helmet.

After Tracy introduces the rule changes in the NFL, he discusses if these changes will completely change the NFL to the point that it no longer constitutes football. Tracy claims that although some of these changes are monumental, they are not big enough to change the nature of football, but Tracy does mention that a line must be drawn or the NFL could change so much that it is no longer football. I am an avid golfer and this got me thinking about golf. When people change the rules of golf, can it still be considered golf?

The golf rulebook consists of countless rules that have multiple parts; these rules can range from how to keep score to how to drop a ball when you hit it out of bounds. Out of bounds can be yellow staked, red staked, or white staked and each has different rules. When playing in a registered tournament, you must abide by every rule in order to avoid disqualification, however, when you are playing for fun, there is no one to enforce each rule.

When people are playing on there own, people give themselves “gimmie” putts, which means that a close putt is given to the player as if they made it. If people hit the ball out of bounds, they may not drop the ball at exactly 1 club length away from the hazard, which is a strict golf rule. My mom, for example, takes multiple “gimmies” and does not follow the rules about how to play a ball after hitting it out of bounds. 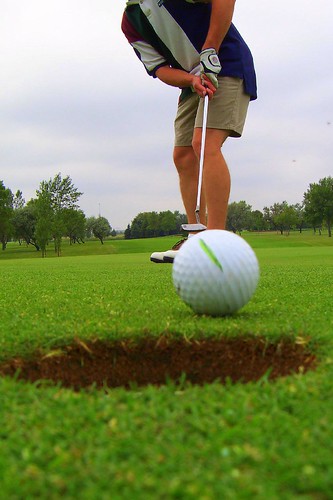 If people do not follow the rules of golf exactly when playing, are they really playing golf? I look at it similarly to Tracy; there must be a line where the rules are bent so much, that it is no longer golf. If you drop the ball one and half club lengths rather than one, your score would not be altered. However, if you are consistently counting 4-foot putts as made, you are drastically changing your score and it cannot be considered golf in comparison to tournament golf.

The golf rules must be able to be bent in order to have casually players, but I believe there has to a more definitive line in order to protect the integrity of the game. My mom is not even playing golf compared to me. Tracy forced me to look at golf from a different perspective and understand if by editing the rules, you change the game you are playing.