I loved sports for as long as I can remember, and I’ve been a Michigan fan since before I was even born. My parents met at the University of Michigan and bonded over their love for all things competitive. They got married and had me and my

The University of Michigan is a place that values tradition and pride in their school and their athletics above all else.

brother and dressed us in “Future Wolverine” onesies. Some of my oldest childhood memories are sitting on my dad’s shoulders at the Big House or climbing up the steps to Chrisler. So when I fulfilled my familial duty (and my lifelong dream) and chose Michigan as my future alma mater, it came to no surprise that I begged my parents for season tickets to everything. For this one magical year, I’ve lived in total bliss, attending everyone men’s football, basketball, or hockey game that fit in my schedule. However, after playing and watching basketball my whole life (and attending Michigan games this season) as well as attending as many hockey games I could, I’ve noticed similarities and differences between the two sports.

There’s a lot that I could say about the two sports, as I love them both undeniably. I grew up playing and watching basketball 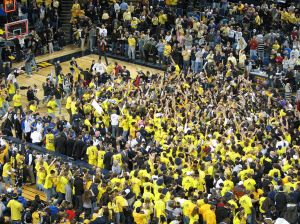 Fans take basketball very seriously and charge the court after a big win in 2008.

and hockey was huge in my household. I’ve attended multiple games this year by the Michigan Men’s Basketball team and the Michigan Hockey team and if there is one thing that sticks out in my mind about all of them, it’s the role of the spectator. When I read Giamatti’s Take Time For Paradise: Americans and Their Games, the importance of the role of the fan was discussed. Giamatti talked about how sports and games were played (in part) not just to allow the athletes to escape into something they loved, but to provide solace for the fans of the game as well. In essence, the fans became an integral part of the game, especially when the game was being played in arenas that housed thousands of people.

This idea from Giamatti got me thinking about how important the fans were at the basketball and hockey games. At basketball games, fans line up for hours to get good seats in the “Maize Rage” section–a 400 person standing online section that leads the students in cheering. They sit right behind the benches and cheer constantly for our team (and constantly against our opponents).  The same can be said for the rowdy student section at Yost Ice Arena. While I think that Giamatti is right in believing that the fans are a part of the experience for the athletes and that without the devotion from the fans, athletic competitions wouldn’t play nearly as an important (semi-religious) role in America as it does, I don’t think that Giamatti accurately looks at how much the fans affect the actual game. 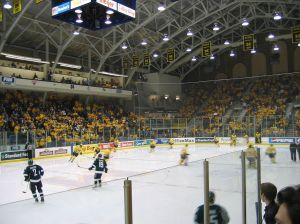 The atmosphere at Yost Ice Arena is electric as fans and players take the game extremely seriously.

As I sat in both student sections, I watched how the enthusiasm rubbed off on the teams. If the fans were uninterested, the team would usually perform better. I realize also as someone who used to play sports that playing away teams were harder because the amount of fan support you had was generally less than the amount the other team had. In fact, I watched at the Syracuse basketball game how Maize Rage’s cheering egged on the team to a nail biting win and how the overwhelming turnout at the OSU hockey game gave the team the support they needed to beat our rivals.

Giamatti is right in saying that the fans need the games they watch to escape from their lives, and that the team owes it to the spectators to give them this sanctuary. However, Giamatti misses the key point that sports teams need the fans as well. After watching the impact that fans have on at live games firsthand, I can say that in many cases, fan support and unity can do wonders for the unity of the team itself and improve the way the game is played. It’s a two-way street: Fans need their sports teams, but the team wishing to be competitive. also needs the fans. They can’t coexist without the other.