The University of Michigan has a prestigious reputation.  The fact that Michigan is known for its top ranked academics and athletics puts the university under an immense amount of pressure.  Michigan claims to be the “Best of the West” in their fight song, setting the school’s standards extremely high.  The relentless pressure that is put on the university affects not only the students but the administration as well.  Michigan’s athletic director, Dave Brandon, was recently forced to resign from his position.  In chapter 13 of the Leviathan, by Thomas Hobbes, states, “…from this diffidence of one another, there is no way for any man to secure himself, so reasonable, as anticipation; that is, by force, or wiles, to master the persons of all men he can, so long, till he sees no other power great enough to endanger him” (Hobbes 2). This quote shows that Dave Brandon took this job knowing how difficult it would be and that his job was at stake everyday. Hobbes expresses that no security is possible and life is full of horror. The athletic director position at the University of Michigan is incomparable to any other and Dave Brandon understood that when he took the job; he knew how difficult the job was and what was at stake every single day.  The Michigan department program has been known for its competitiveness and high expectations.  Although Dave Brandon lost his position because of critics who complained that as the Michigan athletic director he did not uphold the expectations of the program, as a student athlete, I can vouch for Dave Brandon, by saying that he bettered this University every single day that he stepped into office.

The student body has ridiculed Dave Brandon because of his business decisions to raise ticket prices and expand and renovate the athletic facilities around south campus.  It is unfortunate that the opinion of Dave Brandon is so negative with the student population, but the athletes have had the chance to meet Mr. Brandon and have experienced the positive changes he has made for the athlete population. The student body had such a negative outlook on Dave Brandon that they took great lengths to attempt to get him fired.  A few actions they took was having a rally in the Diag and creating an online petition calling for his job. 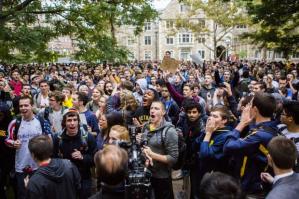 Students in the Diag rallying to fire Dave Brandon.

The problem is that many people that signed the petition without knowing all details. One main issue with the petition was that some people who signed it without attempting to look for all the facts and searching for Mr. Brandon’s and the athletes’ side of the story.  One huge example is that Dave Brandon cares deeply about each student athlete on the Michigan campus.  As part of the first women’s lacrosse team here at Michigan, I can vouch that without Dave Brandon the men’s and women’s lacrosse programs would not exist at Michigan.  He not only fought for the creation of our program, but has also raised millions of dollars to provide our teams, as well as all the smaller teams in the athletic department, the best facilities in the NCAA. These facilities will be placed on South Campus and are priced at 200 million dollars.  Dave Brandon has not only promised but has guaranteed his athletes the best, and has risen above all standards as our athletic director.  He works around the clock to make sure that the athletes at Michigan are taken care of and satisfied to be at this university. He makes sure to ask us personal questions about how things are going in order to see if he can help in any way possible. He takes time out of his day to be at all of our games. He even flew to the first women’s lacrosse game at Villanova to watch in person, as the lacrosse team made history. He is not just a businessman; he is personable and caring for each individual athlete on campus. Dave Brandon has guaranteed that all 935 student athletes at Michigan are satisfied with their lifestyles and if you ask me, that is the most important and most difficult job an athletic director can have, and he was successful. 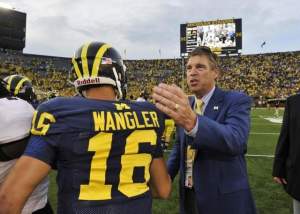 Dave Brandon is a true Michigan man.  He dedicated his work to bettering the athletic programs here at the University of Michigan.  He is an incredible leader and it is OUR loss to have him resign.  Unfortunately, the decline of the football team’s success over the passed few years had to be blamed on someone and the outrage of Michigan’s fan base, alumni and student body caused people to revolt against Dave Brandon.  The pressure on Michigan’s athletic department put Dave Brandon under a magnifying glass and the world was waiting for him to do something wrong. As we can see throughout our history: if something goes wrong, society will find someone to blame.  Dave Brandon is human, he is not perfect, and it was not right for us to put that immense amount of pressure on him, to set him up to fail. Dave Brandon had to step down; the job had become an endangerment to his livelihood. Any respectable person would understand why he would resign. The announcement of Dave Brandon’s resign was a shock and a terrible reality to everyone in the athletic department. The fact that the student body and many other fans turned against the football team and Dave Brandon is something that student athletes cannot believe happened. Dave Brandon will forever be missed by his student athletes.

Currently oil producers face a problem that they would not have expected in years past, a glut of oil. While refiners and consumers are reaping the benefits of low oil prices do to a supply flood in the market, oil-producing countries are hurting. For the first time in years the price of a gallon of gasoline is down to below three dollars a gallon. For producers of oil this means lower revenue and some nations are trying to do something about it. The three philosophers who wrote about social contracts would have something to say about this.

END_OF_DOCUMENT_TOKEN_TO_BE_REPLACED 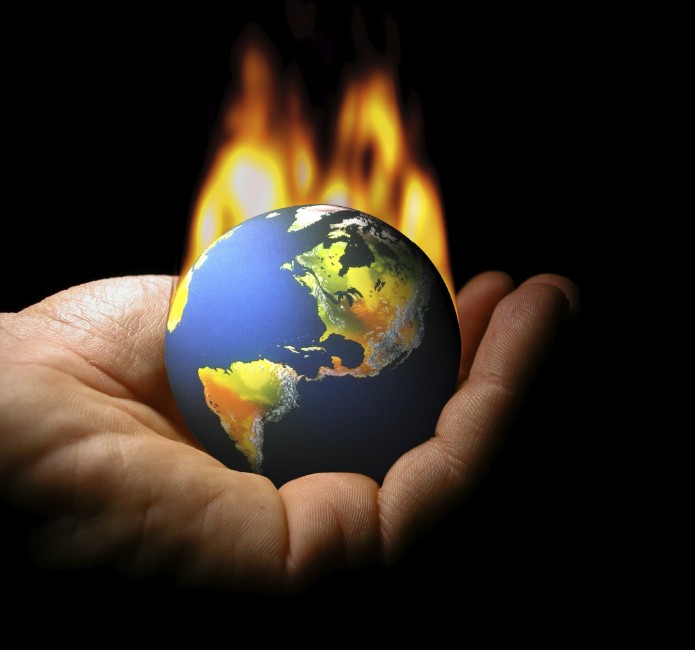 Climate change has been an ongoing debate for many years now. Beginning in 1997 the first protocol, the Kyoto Protocol, was introduced. This protocol is an international agreement that sets emission reduction targets that countries are supposed to try and meet. This was seen as the first step to global emission reduction. Furthermore the Cancun agreements, also set to limit greenhouse gas emissions, were set in 2010. There have been many other conventions to try and come up with ways to reduce emissions, but does it really seem like we are taking the necessary steps to reduce them.

Despite all of these negotiations, greenhouse gas emissions have continued to increase through the world. Here is a short clip which discusses climate change and its impact. Why have emissions increased when we are trying so hard to reduce them? The article by Nunes states two main points which make agreements to reduce emissions so hard. First, is the legal aspect of the agreements. No country wants to get themselves into a position that does not better themselves. Nunes goes on to say that the negotiations “reveal very specific national interests”. Countries are making agreements with their own best interest in mind, which takes away from the actual climate change issue. The second issue is language barriers. It becomes difficult for cooperation to take place between countries that cannot fully understand each other, or the process takes longer than intended. 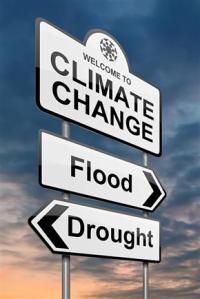 I think that although we have tried to negotiate in the past, the only way to truly make progress to a cleaner earth is by adopting Hobbes logic. Hobbes believes that in order to succeed you need a sovereign, or someone who ultimately calls the shots. He states,“the only way to erect such a common power is to confer all power and strength upon one man, or assembly of men, that may reduce all their wills, by plurality of voices, unto one will”. In the case of climate change this could be the UN or the security council. Furthermore, Hobbes suggest that “covenants, without the sword, are but words, and of no strength to secure a man at all”. This explains how, without contracts that specifically say how much each country will reduce their emissions, and without punishment for failure to reach those goals, the agreements becomes pledges that the countries will forgo. As Nunes says, “there are too many conflicting interests”. The countries need to give up their power and comply to a single power like the UN in order to save this planet. Without cooperation, self-interest will destroy us.

Junior year in high school, I discovered Transcendentalism. Its core beliefs center around the inherent goodness of both people and nature. Transcendentalists believe that society and its institutions—particularly organized religion and political parties—ultimately corrupt the purity of the individual. People are at their best when truly “self-reliant” and independent. The concept of community can only come to full fruition when it is composed of such individuals. I soon became passionately interested in the inspiring and empowering messages of individuality that were promoted. Although Transcendentalism was a religious and philosophical movement led by Ralph Waldo Emerson and Henry David Thoreau in the 1830s, it still provides much insight into the continual tension between the individual and an established elected authority. Thomas Hobbes, John Locke and Jean-Jacques Rousseau are some of the most important figures in philosophy that established and expanded on this tension. They did so by theorizing about the origin of society and the legitimacy of the authority of the state over the individual through social contracts. Through these, they expressed what they thought was the responsibility of government and the role of people within a society.

Meanwhile, all three, Hobbes, Locke and Rousseau, had differing points, especially when it concerned the advantages of state of nature versus the state under social contracts. Transcendentalists and these philosophers alike deal with the same central question:

How can you remain an autonomous individual while having to surrender some of your own will to govern yourself to an elected authority? The role of the individual and how to preserve that individuality and self-determination is always at war with the common good of society in a state governed by social contracts. END_OF_DOCUMENT_TOKEN_TO_BE_REPLACED

As students, we are expected to uphold to Academic Integrity. For example, when taking our reading quizzes, we are expected to do the readings and then do the quiz. As Mika continuously mentions, he sometimes includes things on those quizzes to ensure that we are indeed doing the readings and not just looking up the answers on Google. In the reading, Thomas Hobbes’ Leviathan, the fool is mentioned and his vision is seen as breaking contracts or covenants is your choice, which is based on your benefit. So the way I look at it is we are the fools in this situation.

END_OF_DOCUMENT_TOKEN_TO_BE_REPLACED 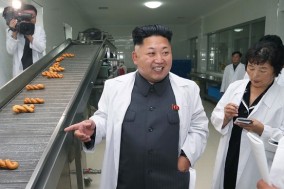 In his book Leviathan, Thomas Hobbes introduces us to the “Fool’s Challenge”: the idea that contracts between people or nations can be broken at anytime no matter the resulting consequences. Thomas Hobbes spends part of his book refuting this point because he feels that breaking contracts with allies decreases the chance of survival because the allies become less and less willing to help out going into the future. North Korea’s communist regime has been, for the last couple of decades,doing exactly that and my blog post will, hopefully, leave you with a thorough understanding of what I think Hobbes would have to say about North Korea’s current policies concerning diplomacy.